Programme Managers potentially have a greater stake in Thinking and Working Politically (TWP) than many other development workers.  TWP is driven by three core principles: a) strong political analysis, insight and understanding; b) an iterative engagement with the local context; and,c) flexibility in programme design and also crucially in implementation.  The premise is that development does not happen in a vacuum – success or failure is determined by a host of contextual issues which need to be actively `engaged’ by actors (donors, implementers, partners etc).


So why, arguably, should programme managers be at the heart of this thinking and approach?   Take one set of under-performing programmes I was asked to review in a middle-income country.    The projects did all share good analysis, including of political barriers and constraints.   The initial teams involved had also understood how and why the programmes fitted the relevant issues, and the risks that would need to be managed on the way.     The design, planning and engagement with partners were all strong.

Over time, however, people changed, organisational memory was lost and the initial analysis became buried under the weight of reports and routine business.   The programmes had their designs set, their contracts agreed, and iterative adaption was not in vogue.  Staff focused on managing the many real-time problems and keeping pace with their project cycle management systems.  Somewhere along the line the political relationships stopped being managed, and the direction was set on rails that were determined by the indicators of the results matrix.

The Thinking and Working Politically community advocates approaches that should help to address such problems.   But too often the conversation aims at technical experts or senior managers – rather than the programme staff trying to deliver results.  Studies, such as work by Sue Unsworth and David Booths on `politically smart development,’ suggest that how programmes are managed is critically important.   As a result, the TWP Community of Practice has pulled together lessons from both practitioners and experts into a simple set of characteristics that look a lot like ‘programme management++’.  The community says that programmes that tend to successfully navigate (and even use) their political environments often involve:


At the heart of these characteristics is the assumption that development is an inherently political endeavour, at whatever level you want to look.   Political-will and space must be constantly renegotiated and the programme itself challenged and interrogated.    Adding this idea of active political engagement doesn’t negate old programme models, although it does change the job description of the programme manager.

Most traditional ideas of programme cycle management are conceived as a virtuous circle of planning, implementation and review.  The belief has been that most of the real work is done in  identifying the right area for action, and developing the right design.    The birth of the project is s the really important bit – the 3-5 years allowed for delivery are simply process.   Not surprisingly, programme management can come to mean moving from one formal report to another.    As a colleague from one multilateral donor recently commented – `its easy to do iterative adaption….as long as it coincides with the Mid-Term Review.’

These realities mean that ideas of project management are heavy on design, and light on change.  The following example from DFID is fairly typical with more than 50% of the `active’ cycle focused on getting to programme approval: 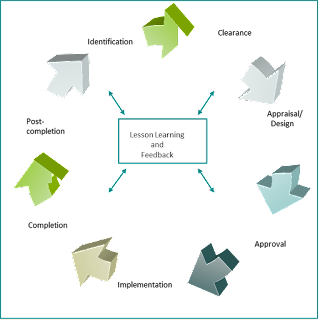 Different development agencies may draw the diagram in different ways but the ideas tend to be similar.  While TWP accepts these realities it also tries to challenge two of the consequences.  Firstly, it argues that programmes rarely succeed or fail on the design alone – although this may be the period of greatest ownership and emotional investment in the idea.   Secondly, it holds that the neat cyclical diagrams are not the problem; it’s how they’re lived out that matters.  These same processes can form the skeleton of a more outward looking, and adaptive approach.  It also recognises that iterative adaption starts with our own systems, in order to gain the space to be more politically smart in our external approach.

As a result TWP programme management builds in stakeholders from the start as part of the process of nurturing the coalitions that can help to deliver results.  Coalitions that must also keep the process honest – owning the original big picture goals and ideas even when real-time issues threaten to overwhelm.   Whereas the willingness to ask hard question is often lost in the formula of an annual review of update, TWP see it as the opportunity to reconnect with, and respond to the environment.   Ideas that are starting to permeate broader discussions.  Perhaps TWP’s greatest challenge is the short-timeframes and unrealistic goals that often frame programme cycle management.  But then political skills need to be applied internally too. 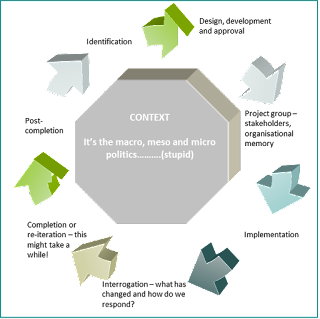 The parallels to Doing Development Differently and Problem Driven Iterative Adaptation are sympathetically drawn; ultimately, however, TWP can sit within bureaucratic realities and seek from there to adaptively manage the implications of context.   It assumes that it’s the power and agency of individuals that matters, including that of programme managers.     Thinking and Working Politically is the add-on for programme systems that calls for different ways of thinking rather than complete reworking of procedures.   Sometimes those help as well, the diagram above was from DFID in 2011, recently that agency has invested in broadening programme management skills and making systems more adaptive.   Ultimately, however, whether systems are overhauled or not, everybody can add political thinking to the mix – enabling the add-ons form programmes managers.